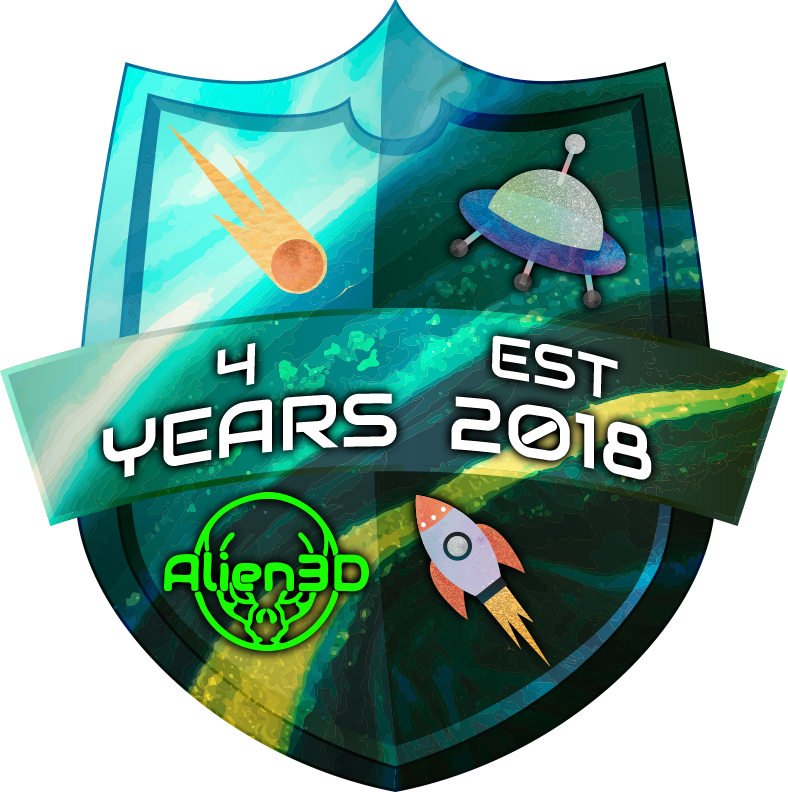 Hey party people! It’s my 4 year mark with Alien3D/UFOs and it’s been a minute since I did one of these so thought I’d give some updates.

Six months ago I announced that there were some awesome things about to happen with Alien3D, and well… I jumped the gun and they didn’t happen. I was approached by a company, that I will not name, that offered to basically buy me out and wanted me to come run their company. The UFOs would stay with me, but I’d have had access to their sample machine so I could run them and UFOs would have been a heck of lot easier to take care of. Numbers were discussed and agreed to, I sold off all of Alien3D’s inventory (mostly at a loss), and got ready to start the new journey… welp, the owner of that company ghosted me… then I find out months later that he sold the company to another party. Didn’t let me know anything at all and left me hanging.

This put me in a pretty bad spot as all the growth I’d built over the 3 1/2 years with products other than the UFO were gone. I used the money from the sales to pay off some debts and thought I was going to be in a better place. Instead I ended up moving quite a long ways backwards. I’d often use the profits from the sales of other items to order stuff for the UFOs ahead of time, then use the UFO profits to replenish inventory. I can’t do that anymore… so I’m back to UFO renewals paying for the next month UFO, which snowballs into items for the UFOs arriving later than previously and me rushing to get all the samples done… which isn’t terrible, I concentrate on my day job for 3 weeks then basically have what I call “UFO Week”, doing the samples, folding the boxes, bagging the projects, packing the UFOs and… well, should be out the door by that point and on time… but as you all know if you’ve followed on social media… the project parts have been taking longer to get to me than they had been.

Between December and April I worked my butt off to get back on schedule, and once I did… ugh. And I’m not making excuses, or trying not to… I take full blame for my choices. I screwed up, I know I screwed up… and I’m paying for it. In February I finally broke 350 UFOs going out… now here in almost July, I’m back down to 290. I’m pretty darn sure it’s because of being late all the damn time. I know most of you, especially those who have been with me for a while, don’t care about late UFOs because you know you’ll get them. I’ve never not sent out a UFO. And I thank you all so much for your support. But I also know that I can’t grow if I can’t keep the new subscribers because of those late UFOs.

As you all may know, I’ve made some changes with the control board offerings in UFOs. The prices on Nanos and D1 Minis keep going up and up and have more than doubled in cost since I first started doing Arduino projects. So as mentioned in UFO Changes I’ve had to change things up a bit. July will be the last month projects come with control boards in every UFO. It will be a D1 Mini (and a ton of other components, I think it’ll have the most components of any previous projects and not just simple little components either) so I hope you don’t think you’ll get short changed lol. And as mentioned in the other post, if I do a Nano project again then I will include a Nano to everyone that one box and then not again… unless you upgrade to the +Nano versions of the UFO. The +Nano boxes will have a control board (most likely a Nano) every month even if the project doesn’t require one. Projects will be better because of this though. I have a list of projects I’ve always wanted to include but couldn’t as they were too expensive to do, but without the cost of the control boards I can do them now.

But where else do I go from here to better the experience for you? Well, last month I upgraded the sample machine… and it’s faster than the previous version, but it has some quirks that annoy me lol. So while I’ll still be using that one for this month’s UFO samples, I am also working on a completely new sample machine that will be fully automated. Feed a spool, walk away… it do its thing. Hopefully it’ll be done before August samples, but if not at least I still have Quirky as backup lol. Additionally, as you may have noticed with as many projects he’s been designing the last few months for me, Fernando/DSK is now my official project designer. A small portion of each UFO goes to him for designing the 3D printed parts of the projects. While it’s not much, and I’m sure some months he wants to rip my head off with tweaks I request and last minute projects I come up with lol, I’m hoping one day I can offer him enough that it’s truly worth it to him. Next, I’ve decided to stop paying myself temporarily – not that I’ve been paying myself much – but I’m taking on some new clients with my day job and going to use what I’ve been paying myself from Alien3D to instead invest back into Alien3D. First with getting UFOs caught back up, then back to expanding to offering more products… though not in 3D printing parts and accessories.

When Dave from Printed Solid and I talk on the phone… which Dave, if you’re reading this… thank you so much for your advice and friendship, it means a lot to me… he refers to us as “frienemies” and it makes me smile every time. PrintedSolid and I didn’t start off on the right foot, but thankfully that’s been put behind us… but the reason I bring up PrintedSolid – I’m not going to compete with them anymore. If you need 3D printer parts and accessories… they have almost everything you could need. So seriously, go buy from them! Especially since Prusa is involved now – they’re rock stars teamed up with more rock stars!

So instead of 3D printer parts and run of the mill accessories, I’m going to concentrate on two things. Coming up with unique 3D printing related accessories, and selling more advanced project kits, like the Stream Deck kit designed by Alex/Super Make Something and I’m in talks with other project designers as well. The kits will have all of the electronics components needed to go along with 3D printed parts to build whatever it is. Then I’ll also sell versions of those projects with the parts already 3D printed. STEM has always been a huge interest of mine, and I really want to push that 3D printing is about more than just printing cute/cool decorations or simple functional items. Which is also why I’m hoping by the end of the year that maybe I can get Share. Learn. Grow. off the ground and get some simple project kits into the hands of those who may not have access to or can’t afford STEM type projects. I also want to get back involved with the community more. I used to be active with streams, and community events and participate in whatever silly things the community was doing. For the past year, my involvement has been pretty minimal. I’ve been so stressed and working on trying to get things in order that I lost touch with the “fun” parts of the community. All work and no play makes Alien a cranky old man lol.

Oh, and there’s still one more thing that is still in the works… the Tesseract large volume 3D printer… stay tuned for updates on that soon. I’m not getting the Batmobile done without it lol.

If anyone has any questions or feedback, feel free to comment below, email me info@alien3d.us or hit me up on Twitter or if you have Facebook those messages will get relayed to me by the person who manages that page for me.

Thank you all again for your continued support through the good and the bad times. I’m still trying and I’m not going anywhere. It’s been an exciting 4 years so far, and I’m excited to see where the next 4 years takes us.